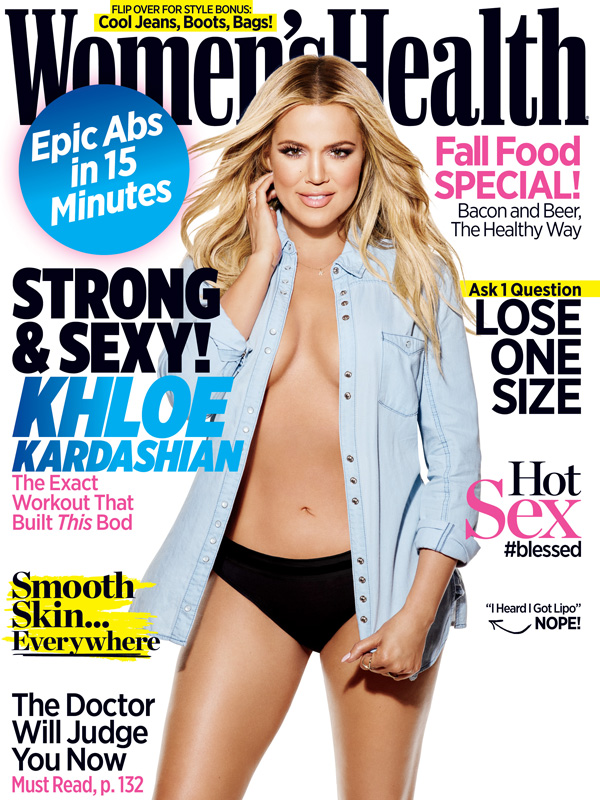 The first thing you’ll notice on the September 2015 cover of Women’s Health: Khloé Kardashian looks amazing. And she’ll be the first person to tell you—it took a lot of hard work to get there.

“It started around 2012,” she tells the mag. “I was having a hard time with [husband at-the-time, NBA star] Lamar [Odom]. It was toward the end of our union, and there was so much drama. I needed a release. At first it was so hard. It was baby steps, but I started feeling so much better.”

Still, she kept at it. “The first 45 days you’re like, ‘F–k this s–t,'” she says. “You’re exhausted, you’re sore, and I actually felt fatter because I was swollen. If you keep going, you’re eventually like, ‘Wow, is that an indentation on my arm?'”

In an exclusive interview with WomensHealthMag.com at her cover shoot, Khloé also talked about what it’s like to live so much of your life in front of the cameras. “It’s definitely overwhelming. There’s pros and cons to everything, but there are times that you feel that there are too many people that know everything about me and you want to pull back,” she said. “But then you have to remember why you were even put into this, the limelight. If it wasn’t for my family and us doing it all together, I don’t think this would be a bearable thing.”

There’s no doubt watching her ups and down unfold on TV has taught her much about herself and the world around her. “I think the beauty of growing up is not really knowing and figuring it out for yourself,” she said. “I do love the evolution of people in general. I think it’s a beautiful thing when someone progresses and evolves in life.” In the past five years, she’s done quite a lot of that, and while she says she wouldn’t change much if she could go back, she does wish she was in the moment more during her early reality TV days. Her advice to her younger self:

“When you’re in a conversation, genuinely be in it. Stare people in their eyes. Know what you’re talking about. Enjoy that moment. When you’re at a lunch, enjoy being—I’m always on my phone when I’m at lunch or with things here or there. I’ve learned to put the phone down and be present.”

For more of our exclusive interview with Khloé Kardashian, including the exact workout she used to get her amazing bod, pick up the September issue of Women’s Health when it hits newsstands on Tuesday, August 11 and stay tuned for more on the website.