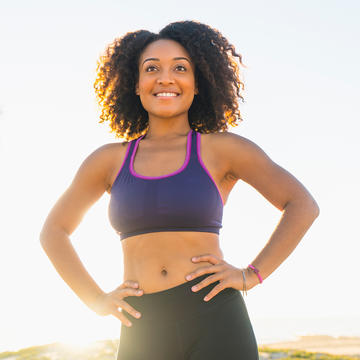 If there’s one thing nearly everyone loves to do (even if you don’t get to do it very often) it’s travel. Who doesn’t like to explore a new destination, whether it be an exotic locale that requires a full day of flying, or 10 national parks you need to visit before you die. But when you travel a lot, there tends to be one thing that goes along with it: weight gain. And for us ladies, that extra weight usually heads straight for that oh-so-wonderful hips region dubbed, not so lovingly, your love handles.

This is where Gunnar Peterson comes in. The celebrity trainer has worked with the likes of Khloé Kardashian and Jennifer Lopez, and he recently partnered with Hyatt Regency Hotels to develop three Fit & Fuel workout-and-meal programs alongside cronut creator Dominique Ansel (yes, he knows how to make healthy food, too). Needless to say, Peterson is the perfect pro to steal some fitness advice from, and here’s what he says is the best way to lose love handles.

At the end of the day, there’s one rule you need to repeat over and over again: “You’re not going to spot reduce, plain and simple,” says Peterson. “If you think you’re going to do 100 crunches and a plank and burn away belly fat, you’re not. Yes, you’re going to make the area stronger but it’s not going to get rid of the fat.” So do yourself a favor and, once and for all, let that idea go.

2. Go for the big muscle groups.

Instead of trying to spot reduce by doing belly exercises, Peterson says your time is better spent targeting big muscle group movements to increase your calorie burn and blast away that belly fat. (But that doesn’t mean you shouldn’t do belly exercises—they do still help develop a stronger core, which is equally important.) “[An exercise] like a squat press, or a lunge with a lateral curl, or a lunge with a biceps curl are all good ideas,” he says. Adding exercises, like planks, to these big, full-body movements that engage multiple muscle groups will give you a well-rounded routine. (Try these total-body exercises that burn fat in half the time.)

3. Work each plane of motion.

If you’re wondering why all those crunches aren’t making a bit of difference on your love handles, that’s because you’re thinking too small (and trying to spot reduce again), when you should be thinking bigger. You just learned that focusing on larger muscle groups will better contribute to overall fat burn and lean muscle mass. Now take it one step further and make sure you hit those muscle groups from all angles. Doing so will reward you with tighter, stronger, leaner muscles overall, which, over time, will diminish the fat around your hips, and subsequently tighten the area around your love handles.

It’s common that one, sometimes two planes of motion get ignored when it comes to core work, and it’s one major reason behind the love handle debacle. That’s why Peterson says it’s important that you work all three—forward to back, side to side, and rotational, which he says is similar to the motion you make when you’re putting on a seat belt. So rather than just doing mountain climbers, which would target your forward-to-back plane, make sure you also build in side planks for some side-to-side action, and wood chops for rotation.

Now that lifting heavier weights is the norm (here are eight reasons you should lift heavy), Peterson says it’s time to apply that knowledge to losing your love handles. “People tend to shy away from rotation with resistance because they think they’re going to get hurt,” he says. “Like, ‘If I move in that motion with that weight I’m going to pull my back.’ But you’re not.” If you train in the gym for those rotative movements in real life that often require resistance—swinging a baseball bat or golf club, picking up your child and putting her in the car, or grabbing a suitcase off the ground and rotating to lift it into the overhead bin—then you’re less likely to get injured when you’re repeating that movement outside the gym, explains Peterson. And that’s why you should do it more often. “In turn, that’s going to make those areas stronger and help you lose the love handles,” he says. So add in moves like wood chops, Russian twists, and bear crunches to regularly work on rotative movements that’ll build up your muscles and blast away those love handles for good. Once you can do the moves confidently with bodyweight resistance, consider adding external resistance, like cable machines, weights, or resistance bands.